Although eight out ten people say that they plan to leave an inheritance to loved ones, almost half of UK adults are leaving to chance exactly who will – and will not – benefit.

A survey of 2,000 UK adults by Tower Street Finance revealed that 84 per cent of Brits plan to leave an average inheritance of £290k to loved ones.

But exactly how that estate gets divided and who stands to benefit is being left to chance as 45 per cent of UK adults say that they have not written a will.

Twenty-three per cent of people aged 55 and over and 47 per cent of women do not have a will.

Despite this, people have strong views on who should, and who should not, gain from any legacy they leave when they die.

Sixty-one per cent of people want their children to benefit from an inheritance, while a further 43 per cent said they wanted to leave everything to their partner or spouse.

Sixteen per cent want to leave a nest egg to their siblings and just nine per cent said any legacy should be given to their grandchildren.

Who do you want to benefit from your legacy?

For the 43 per cent of people who want to leave their estate to their partners, without a will in place, only those who are married or in a civil partnership will have their last wishes fulfilled.

Under the rules of intestacy if a person dies without a will, only married or civil partners, and some close relatives such as children, siblings and grandparents, can inherit an estate.

Cohabiting couples, which according to the Office of National Statistics are now the second fastest growing type of households in the UK, do not have any rights under intestacy.

“Writing a will is one of those things that we all know we need to do, but we put it off.

“No one likes to think about their death, but as our survey shows people have strong feelings about who should, and who should not, receive an inheritance so it’s important they make their last wishes clear in a will.”

Tower Street Finance offers products that make it easier for people to access their inheritance.

Its award-winning Inheritance Advance product enables beneficiaries to access to up to 60 per cent of an inheritance before probate has been granted, while its Inheritance Tax Loan has been designed to help executors pay any tax liabilities to HRMC directly so an estate can be released.

Both products benefit from no credit checks, there is no charge over property, no personal liability and no monthly repayments.

The loan is repaid from the estate funds once it is ready to distribute. There is a 2 per cent origination fee, capped at £1,500 which can be added to the loan, and a fixed yearly interest rate of 19.6 per cent. Interest roll up is capped at 30 months.

A father passed away at the age of 81 without leaving a will. There wasn’t a surviving spouse, so it was believed that everything would be left to his three surviving children – a Kings Court Trust client plus a brother and sister.

When someone dies without a will it’s best practice to reconstruct the family tree with thorough genealogical research to ensure only those who are entitled inherit.

After investigation into the family tree two further children of the deceased were found.

The first traced child had passed away leaving two ‘grandchildren’ as beneficiaries.

The second, who had also sadly passed away too, was disputed to be a stepchild and not a biological relative of the deceased. However, with more investigation it was confirmed that the father was named on the birth certificate. As a result two further grandchildren and two great grandchildren became beneficiaries to the estate.

What appeared to be a seemingly straightforward estate that would be distributed equally between three children, would now be distributed to nine beneficiaries.

Simon Hancox, chief executive officer of Kings Court Trust said: “Our client now has to share his inheritance with nephews and nieces he has never met. This highlights the importance of family tree research to ensure the right people inherit and shows how much more complicated it can be without a will. As highlighted in this case, under intestacy rules, relatives that the family may have lost touch with can inherit which can often lead to family disputes.” 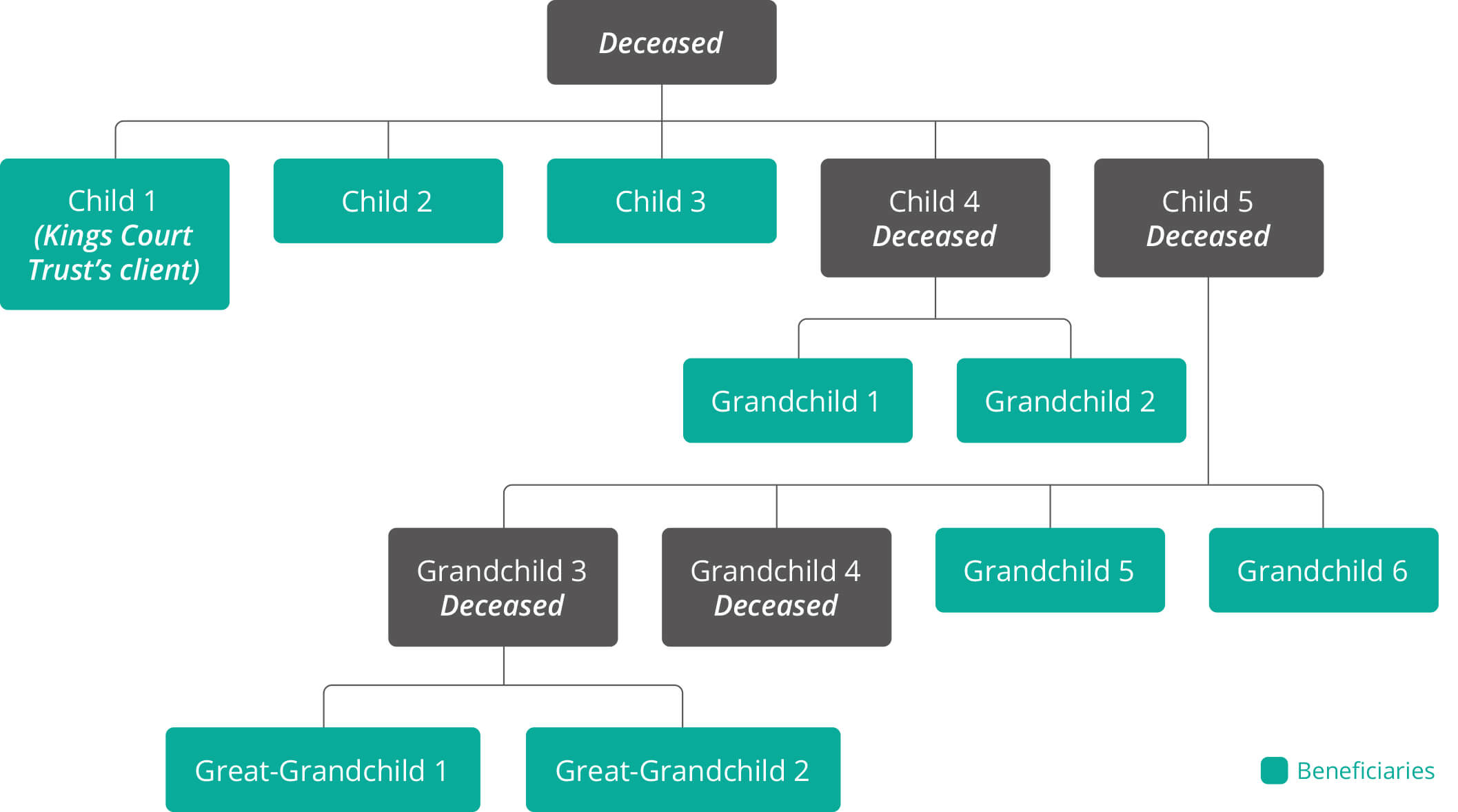