Although it’s very much business as usual at Tower Street Finance and the new way of working means he can finish a meeting with clients based in Devon at 12:58 and start another in Sunderland two minutes later, business development manager, James Emery says he misses sports chats with his mates in the pub – but not queuing to buy a round…

Yes and then the role hinged on us getting FCA approval for Inheritance Advance.

After working with my family for many years in South Wales in the B2B and retail sectors I needed a change and really wanted this job. So, when the approval came through and I was offered the role I was really looking forward to getting stuck in and meeting the rest of the team.

It was August before I had the chance to see the majority of my new colleagues face to face!

Are there any cases you’ve been involved in that your most proud of supporting?

There are two cases that stand out. In one we had an Inheritance Advance application on the Friday and they got the funds seven days later. It was to buy a home for the applicant’s mum who needed a fully adapted bungalow to meet her needs. Without the advance they would have missed out on the property.

And we’ve also just helped a couple in their 70s buy their first ever home. It was such a lovely moment when they were blowing kisses over a WhatsApp call to my colleague Rebecca.

Your role is based on networking and relationships – how have you adapted your approach?

Obviously I prefer face to face – there’s no substitute in terms of building relationships for meeting over coffee, shaking their hands and seeing the whites of their eyes.

However, Zoom and Teams have been a godsend. Although I’ve done a few calls with a group of solicitors where multiple cameras were turned off – that clearly makes it hard to read the room!

The positive is the geography though. I cover Wales, the South West and the North East and I can hold meetings in all three areas over one day.

With four children, how’s home schooling been for you?

Well the two older ones don’t need me so much. Jas, 21, is at Plymouth university and Ethan, 18, is just about to join the RAF.

My two younger children, Katie and Ben have needed a bit more support. The ironic thing is that neither of them have a problem doing the work – they just forget to hand it in! The best advice I’ve had though is that you can’t expect to be a teacher in every subject.

What are you looking forward to most once lockdown ends?

I can’t wait to go to the pub with my mates to talk about rugby and football – but I don’t miss queuing at the bar – I’m hoping table service is here to stay.

As well as loving the game of rugby it’s also how I met my wife Deb. Wales were playing England at the Millennium Stadium and I literally spotted her in the crowd. She’d seen me too and her boss came over, gave me a business card, and suggested I get in touch. When we got engaged exactly two years later, we were invited back to another Wales v England game with a message for us on the big screen, and we were also given permission to take our engagement photos on the pitch.

The added bonus for me was that Wales won both games! 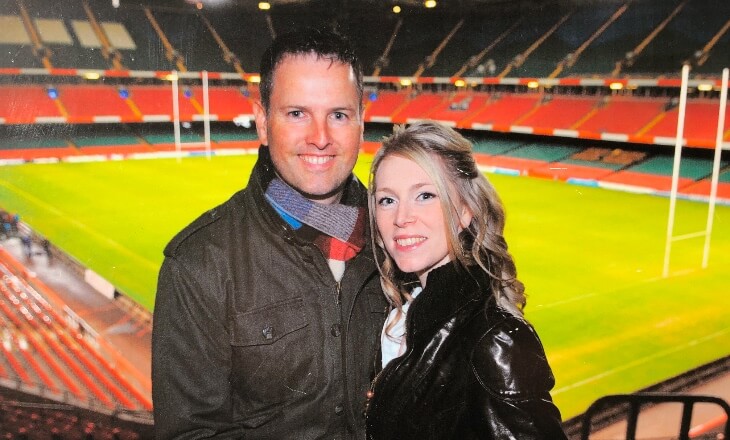